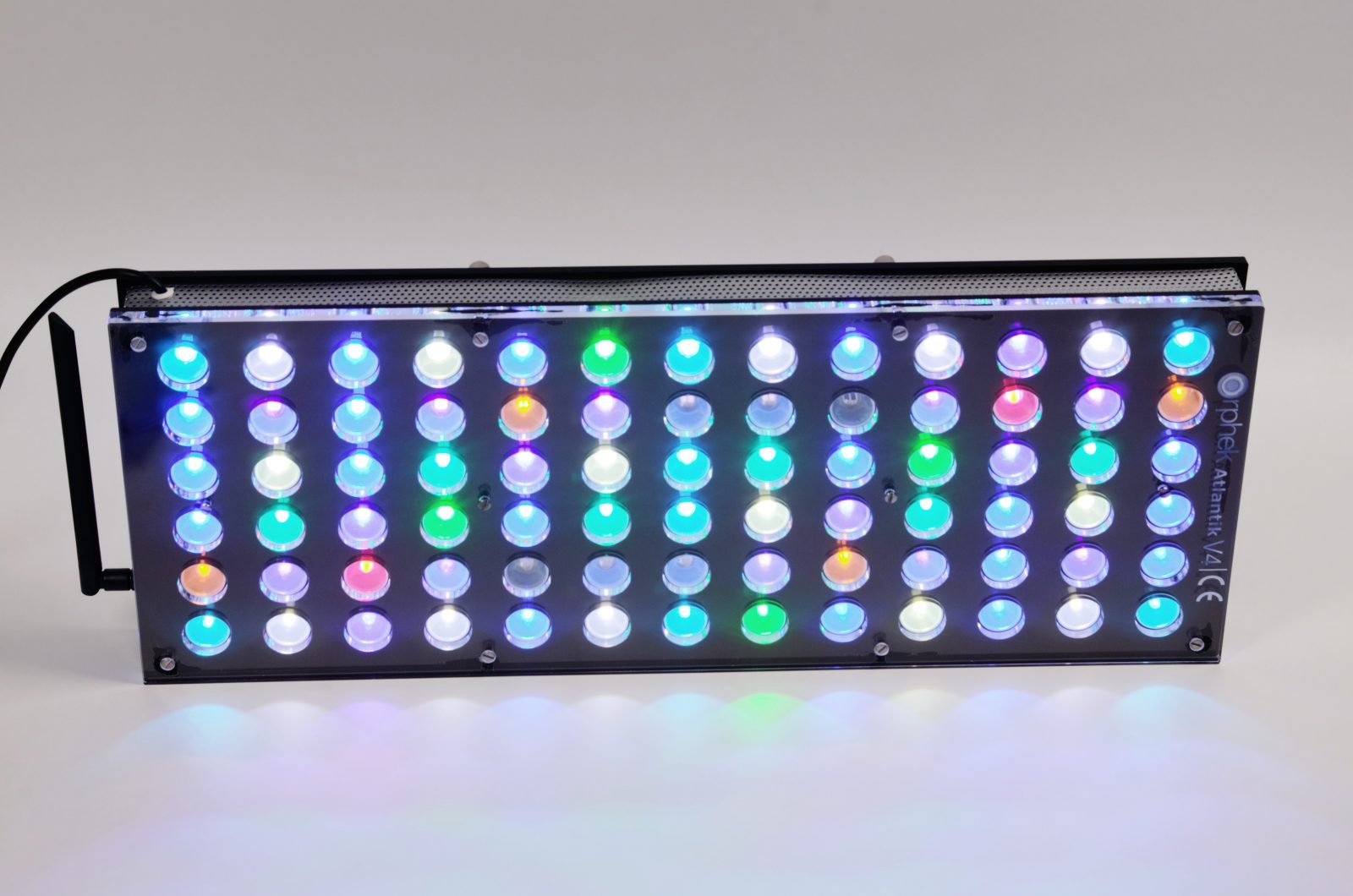 Lighting an aquarium would be a simple affair if only aesthetic considerations mattered, however advanced aquarists’ goals often include husbandry of plants, algae, corals and other photosynthetic organisms.

To that end, it was originally suggested that only ‘intense’ lighting was required, and spectral characteristics were of a secondary concern. Our understanding of the needs of reef organisms has advanced over the years.

In this installment, we’ll look at two important lighting parameters –

Photosynthetically Active Radiation (PAR with a bandwidth of 400-700nm)

These two categories can not be mutually exclusive. A lighting source of high intensity (PPFD) and low useful output (PUR) has few practical applications, while the opposite is also true – low PAR output with high PUR is of limited usefulness.

This time, we’ll look at PPFD and PUR generated by ultraviolet, violet, and blue LEDs in an Orphek Atlantik V4 LED luminaire.

The procedure used was as follows.

Black poster board with a hole exactly the diameter of the lens of each LED allowed measurement of individual LEDs (although the thick plastic cover of the luminaire allows some blending of light from adjacent diodes.)

A Li-Cor LI-1200 quantum meter’s sensor (calibrated for ‘air’ measurements) was placed directly over the LED and the result (as µmol·m²·second) was recorded.

PUR was estimated through use of a Seneye Reef device that reports the result as a per centage.

The Seneye estimates PUR by comparing red, green, and blue outputs. Photosynthetic efficacy was estimated by multiplying PPFD by per cent PUR.

While the procedure is not perfect (particularly with LEDs producing radiation outside of the PAR sensors window of 400-700nm) it does allow a rough estimate of performance.

These wavelengths are useful in photosynthesis – they can be absorbed by chlorophylls a and c2.

They can also excite fluorescent proteins found in many corals. There is also the possibility that these can induce the expression of some of these colorful proteins (both fluorescent and reflective in nature.)

Ten violet LEDs are found in this luminaire, with peak outputs at 410 to 428nm.

Some of the comments made about UV radiation are applicable to violet wavelengths as well.

Water appearing blue to our eye is the hallmark of clear oceanic waters, hence blue light makes a reef aquarium appear natural but more importantly, chlorophylls absorb this light and use it in photosynthesis. This luminaire contains 32 LEDs producing blue light, ranging in peak outputs from 431 to 473nm.

Using the techniques previously described, these are the average PPFDs of these LEDs.

Figure 1. The Li-Cor PAR meter will under-report PPFD of ultraviolet and violet LEDs since the sensor’s cutoff is at 400nm. The blue LEDs are powerful. PPFD is reported as micromole per square meter per second (µmol·m²·sec.)

As mentioned, PPFD is only part of the story. We’ll now multiply the PPFD values by PUR factors obtained through use of the Seneye device. These are the results. 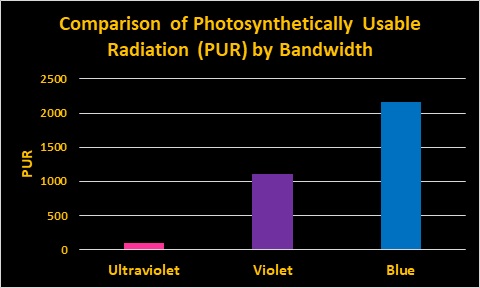 Figure 2. Using factors generated by the Seneye device, Violet wavelengths are most efficient (87%) in the promotion of photosynthesis, followed by Blue at 80%, and finally UV at 74%.PUR is reported as micromole per square meter per second (µmol·m²·sec.)

Next time, we’ll look at other bandwidths and discuss their importance.