You are here: Home / News / Lighting the Reef Aquarium Part 4

Figure One demonstrates the Saturation Point of various Acropora species. 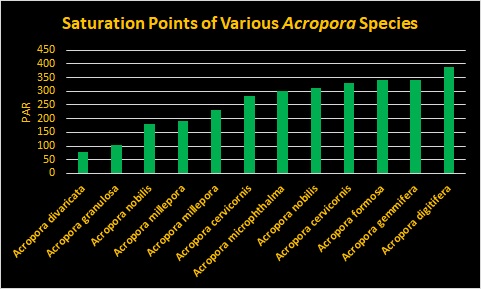 Figure One. Saturation Points of Acropora species. Generally, the deeper the depth of the coral, the less light it requires. However, this is not the case.

The values shown in Figure One should not be considered as absolutes for many reasons. First, testing techniques (such as respirometry) can not distinguish light requirements of shaded or highly           illuminated areas – it reports only an average amount of light required. In addition, some corals (such as Acropora cervicornis) are known to host different Symbiodinium species throughout the year – zooxanthellae with tolerance of higher light (and heat) tolerances can be prevalent during the summer months. If light requirements are determined through PAM fluorometry, the results are germane only to the small area tested.

Whatever the caveats, the results of testing done by various researchers over the course of many years demonstrates that Acropora species do not need a great deal of light. Indeed, the most light used by an Acropora digitifera is about 20% of maximum sunlight at the water’s surface. These light intensities are easily achievable with today’s lighting systems.

Bear in mind that it is acceptable to expose a coral to light intensities higher than shown in Figure One, especially if expression of intense coloration is desired.