In Part 4 of this series, we examined the lighting requirements of a popular aquarium coral, Acropora.

This time we’ll look at the light preferences of another popular reef aquarium inhabitant – the photosynthetic clam Tridacna.
According to World Registry of Marine Species (WORMS.org) there are 9 Tridacna species (T. maxima, T. squamosa, T. crocea, T. derasa, T. noae, T. squamosina, T. lorenzi, T. rosewateri and T. mbaluvana) all of which inhabit the Indo-Pacific Ocean. Their popularity is undeniable and is probably due to their colorful mantles (the fleshly tissues that extend over some of their calcium shells, or valves.)

To understand the lighting requirements of Tridacna (or more correctly their symbiotic alga -Symbiodinium), we should examine the types of zooxanthellae found within them. But first, some background on Symbiodinium. Years ago, it was thought there was only one zooxanthella species -Symbiodinium microadriaticum.

Today, there are 14 known species divided among clades (a clade is something that shares a common ancestor.). Some species/clades are ‘generalists’ meaning they are adaptable to a wide variety of conditions (such as tolerances of high or low light, temperature, etc.). Others are ‘niche’ species that have limited adaptive abilities. In addition, early attempts to genetically fingerprint zooxanthellae were crude and listed clades as only A, B, C, etc. Later analyses would refine these attempts, and found clades listed as, for example, A1, B3, C2, and so on.

Early research on Tridacna crocea, T. gigas, and T. squamosa found them to contain zooxanthellae described as simply Clade A (today, this might be found to be Clade A1.).
Researchers tell us that Tridacna maxima, T. gigas, and T. derasa can possibly possess the generalist Symbiodinium goreaui (also known as Clade C1.). Further research states specimens used in these analyses were collected at depths of 1 to 8 meters.
Other research found T. gigas and T. maxima could also have a symbiosis with Symbiodinium fitti (also known as Clade A3.) These were also collected at depths of 1 to 8 meters.

Tridacna species collected at depths of 1 to 10 meters near Okinawa, Japan had a relationship with Clade A6. We can assume this zooxanthella is tolerant of lower light and temperatures than their tropical counterparts.
So, what does this tell us? If we assume that few Tridacna clams are imported from Japan and that most are from the Indo-Pacific, those specimens in the aquarium trade contain zooxanthellae of Clades A and C (with the possibility of another, Clade D. Clade D is generally assumed to be an opportunistic clade that exploits stressed environments.). We can expect these clades to be tolerant of high light. Indeed, data I generated in Hawaii years ago (Riddle, 2007) is confirmed by recent research Jantzen et al., 2008 – See Figure 1.) 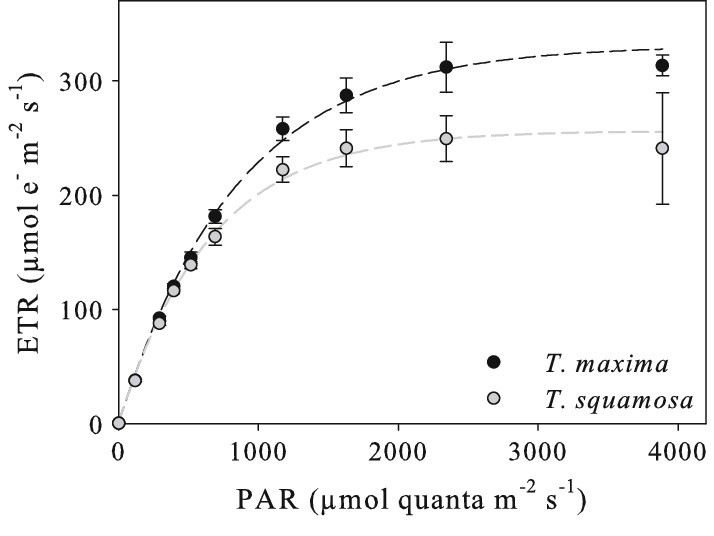 An estimation of the maximum rate of photosynthesis is greater than 1,000 µmol·m²·sec.

The message here is clear – many, if not most, Tridacna clams contains zooxanthellae that are tolerant of high light. The thickness of these clams’ mantles also allows self-shading of zooxanthellae which, of course, increases the light requirements by increasing the Saturation Point. Jantzen et al. (2008) found T. maxima can survive if light intensity is enough. On the other hand, clams could benefit by feeding if light intensities are low.