You are here: Home / News / Lighting the Reef Aquarium Part 3- The Myth of Corals Requiring Unlimited Amounts of Light

I had the pleasure of living on the Big Island of Hawaii for almost two decades and took every opportunity to study the natural reefs there (See Figure 1.)  One of my projects involved the determination of light required by photosynthetic corals (note: required versus tolerated.) 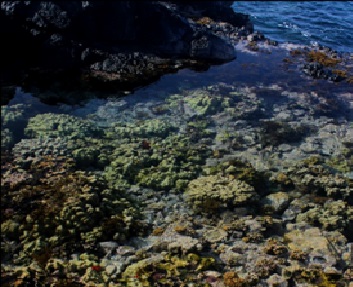 At the time, getting permits required by the State of Hawaii was relatively easy, and once these were in hand, the project could proceed. Determination of rates of photosynthesis requires all the equipment normally found in a wet lab, plus some highly specialized instruments.

The first of these is a quality Quantum (or PAR) meter (discussed in some detail in Part II of this series.) The second is a Pulse Amplitude Modulation (PAM) Fluorometer (See Figure 2.) 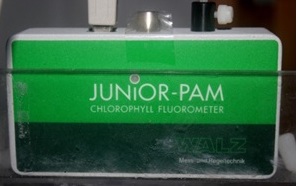 Figure 2. This instrument, called a fluorometer, can determine rates of photosynthesis in plants, algae, and zooxanthellae.

In a nutshell, this instrument monitors how light is used or disposed of during the process of photosynthesis and involves measuring chlorophyll fluorescence. It can determine if light is used in photochemistry, or shed as heat, or dissipated through natural protective cycles. It is well beyond the scope of this article to discuss these pathways.

Suffice it to say that, within the context here, we are interested in how much light is required to maximize photosynthesis within the zooxanthellae found within shallow water corals.

It is common among many to believe that zooxanthellae found in many shallow water corals have an unlimited ability to absorb light and use it in the photosynthetic process. After all, it is easy to find photos of corals fully emerged during low tide and being blasted by full strength sunlight. It leads us to believe that more light must be better!

When studying photosynthesis, there are a few things we need to know. Light (in the form of photons) can be absorbed by photopigments (such as types of chlorophyll, peridinin, etc.) and hence flow through the two Photosystems and beyond in the form of electrons. Other points to understand – there is a minimum amount of light required (called the Compensation Point, where oxygen production meets the respiratory needs of the coral animal and symbionts.)

The next milestone is the Saturation Point where the rate of photosynthesis is at a maximum and any increase in light intensity will not result in a higher rate. The third point is Dynamic Photoinhibition – it is protection to high light and involves the Xanthophyll Cycle. It is a natural process.

For the purposes of this article, we are most concerned with the number of photons (light intensity – PPFD or PAR) that exceeds the Compensation Point, meets and exceeds the Saturation Point and how Dynamic Photoinhibition affects the rate of photosynthesis.

Two stony coral species were chosen for these experiments. The first was Porites lobata (commonly called the Lobe Coral) and the ‘SPS’ coral Pocillopora damicornis (the Wart Coral.) Results were comparable, and we’ll discuss only those in the procedure involving P. lobata. 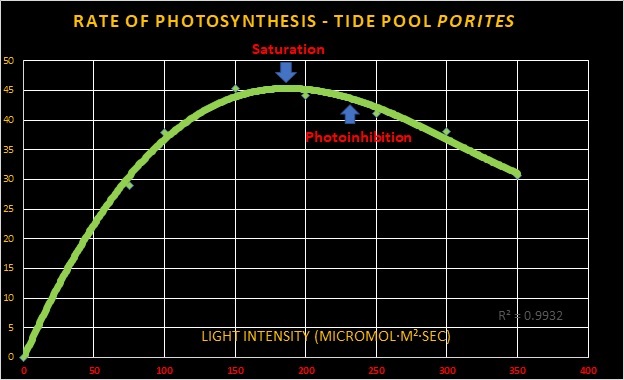 A close examination of Figure 3 reveals the maximum rate of photosynthesis (Saturation) was achieved at a light intensity of ~200 µmol·m²·sec and Dynamic Photoinhibition came into play shortly thereafter.

The take home message is this: These Porites corals living in waters only a few centimeters deep required only a fraction of the light intensity they will experience. Their zooxanthellae will be at a maximum rate of photosynthesis early in the morning, and their natural protective devices (the Xanthophyll Cycle) comes into play during mid-morning and protects them until light intensity drops in the late afternoon (assuming it is sunny all day.)

Other experiments suggest that most corals require lower light intensities to achieve maximum rates of photosynthesis.

Next time, we’ll look at the light requirements of a coral often found in reef aquaria – Acropora species.