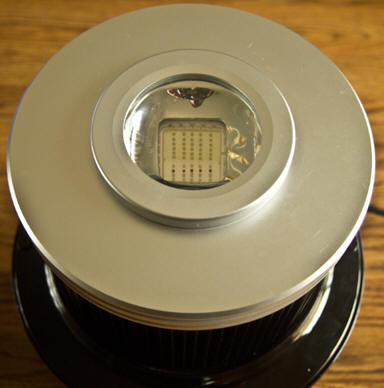 Pendant LED lighting has become increasingly popular in the last two years. The Orphek DIF 50 XP Pendant provides a means to effectively illuminate both shallow and deep tanks (depending on the lens used) with enough PAR/PUR to support corals and other photosynthetic life. Orphek’s engineers have given the Orphek DIF (diffused) 50 Pendant a makeover by introducing a new multi-chip LED which incorporates some high range UV along with some added red. The UV starts out at 380nm, peaks sharply to 410nm, and rapidly falls off. UV radiation in this range is safe for humans according to NASA standards. It also mimics the wavelength of chlorophyllA and B as the spectrograph below will show. This is the first LED fixture that I am aware of that produces blue light without the use of energy wasting blue LEDs which have very low lumens per watt ratio. The Orphek DIF pendants are very versatile. Depending on the lens used, they can be used for cube tanks, large systems, and aquaculture facilities.