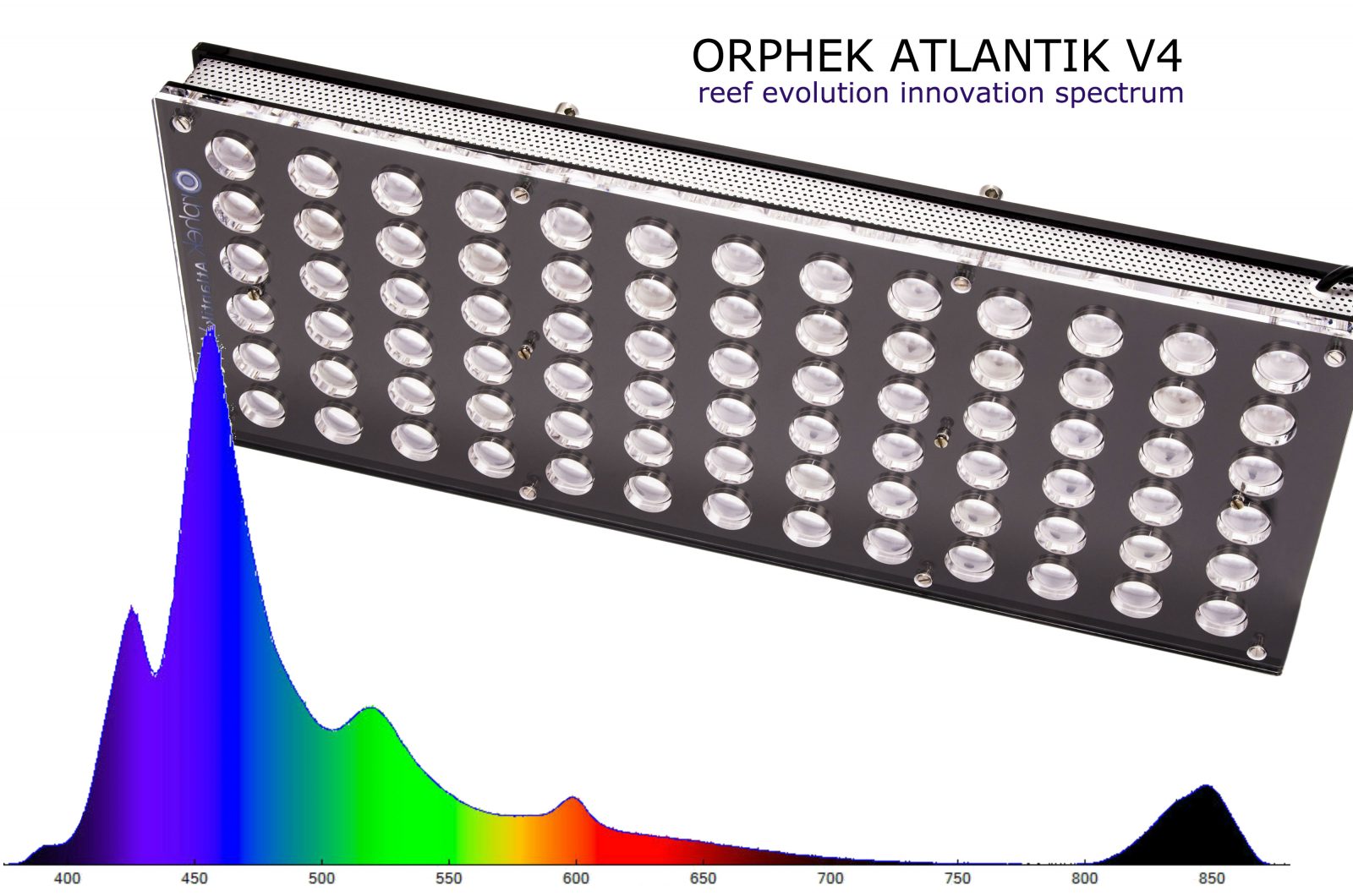 The word has been spread about the newest version of our Atlantik series to be launched soon – THE ATLANTIK V4!

We are very happy to share with you today all the details:

SO WHAT IS NEW?

The Atlantik V4 combines the most technologically advanced Aquarium LED lighting system & the maximum photochemical efficiency in the market.

Orphek has already settled the standard in the market for its advanced comprehension of color spectrums and its influences on coral physiology and once again is about to release another cutting-edge and groundbreaking technology, bringing a revolutionary change in the spectrum provided by diodes, by supplying its best product developed specifically for the needs of photosynthetic marine invertebrates.

Be connected anywhere you go!

Orphek Atlantik V4 reef aquarium LED light technology brings built-in wireless control allowing you to easily program, control, and monitor your light(s) from your cell phone or tablet, any time and any place you are in the world, where internet access is available –  Internet of Things or IoT.

Experimentation with LEP (light emitting plasma light) shows a homogeneously full spectrum, which provides maximum photochemical efficiency for most coral, but it is too weak to color up the coral in a way that most of us like and demand.  In order to get a good coloration with a LEP  a LED lighting needs to be complimented to fulfill its shortcomings in energy needed for coral coloration. We started with the idea of developing a new LED Lighting solution that would have enough power and would also achieve the right areas in the spectrum simultaneously.

This new development isn’t something that happened overnight. A year of testing and experimenting went into this project before we were convinced that we came up with the ultimate spectrum for growing coral and the added benefit of viewing the coral with a more natural look.

The new ATLANTIK V4 spectrum research resulted into the perfect balance between the light corals need and the overall appearance you want to see in your tank. 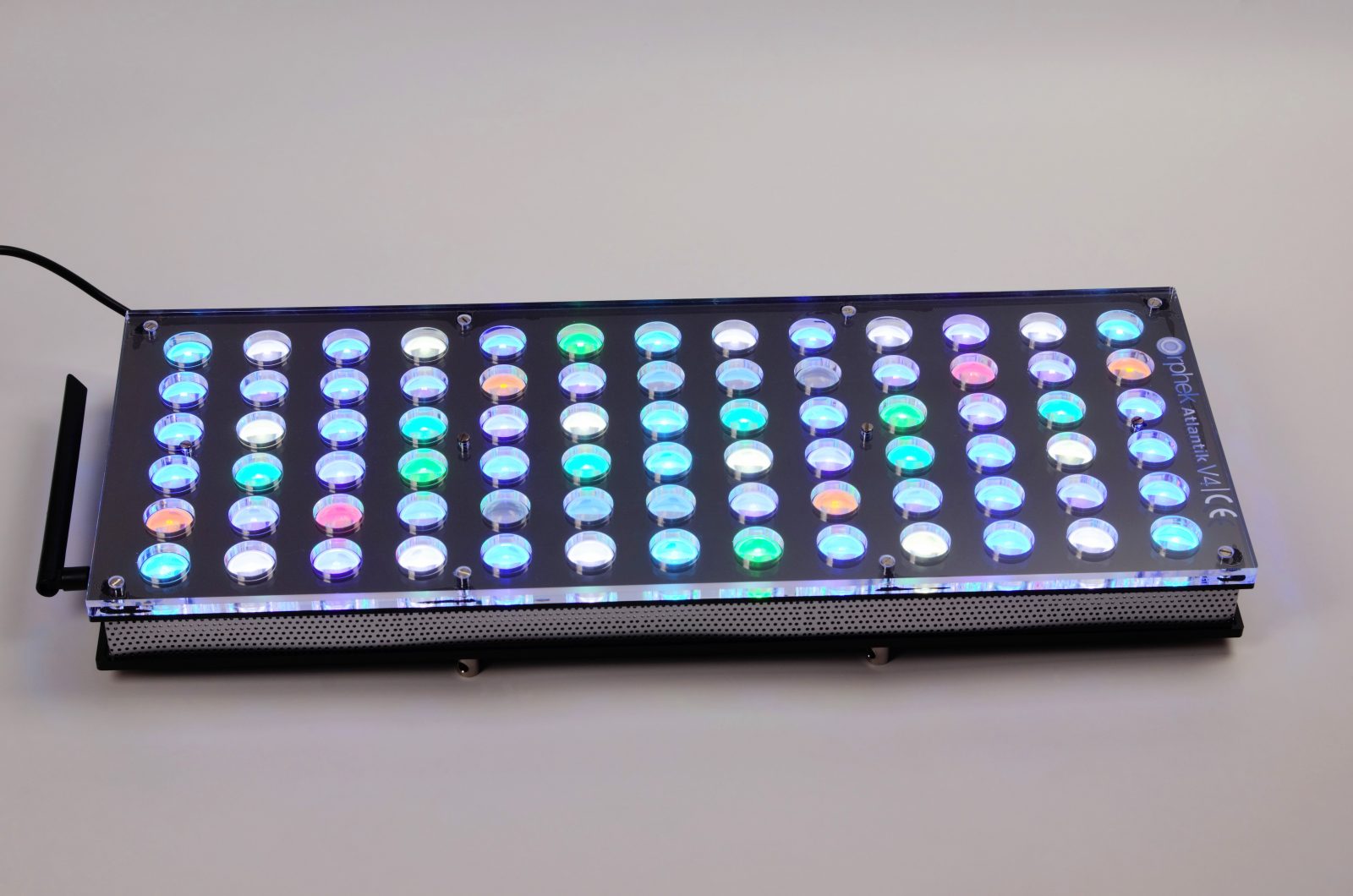 SO WE DID IT AGAIN!

What Orphek offers you today is a new spectrum that not only renders you the right tool to grow healthy and beautifully colored coral, but also produce a light that is pleasing to the eyes.

WITH A SURPRISING ELEMENT!

One of our target goals with the V4 was also to try to minimize as much as possible the outbreak of cyano and/or the growth of nuisance algae.  Of course we all realize that without keeping proper parameters and religious tank maintenance is crucial and no light or system will prevent that, but Orphek succeeded to offer a new spectrum that balances just enough red with other colors of the spectrum to create a healthy balance of light.

CHECK ATLANTIK V4  VERSATILITY AND WHAT IT CAN DO FOR YOU!

CHECK WHAT COMES WITH YOUR LIGHT! (INCLUDED)

CHECK WHAT IS ALSO AVAILABLE TO PURCHASE! (NOT INCLUDED) 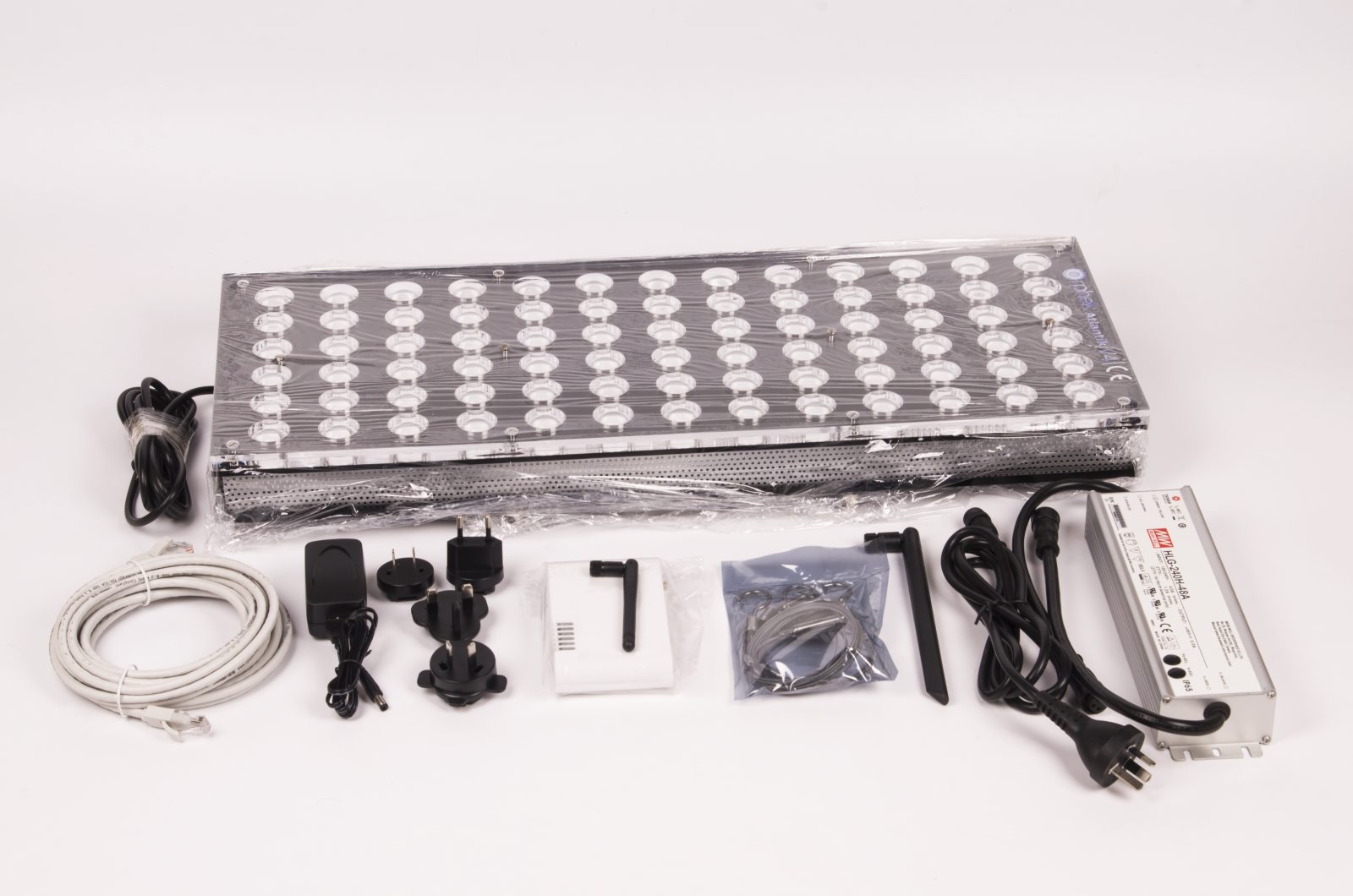 Charts are always a good tool to check photochemical efficiency…

If you look at the PPFD (Photosynthetic Photon Flux Density) chart below you can how closely the ATLANTIK V4 spectrum matches the coral adsorption curve in the graph.  This chart depicts the light in micromoles per square meter per second, that actually arrives at the coral (?mol/m2/s).

Black –  SPS Coral Absorption at 15 meter water penetration/ Colored area is the ATLANTIK V4 spectrum, which was measured at a distance of 70cm/27.3 inches from sensor.

Why we are not closer to the black line, especially at the wavelength of 500nm?

This is the balance between the light you will see (domination of blue and not green) and the light coral requires.  The spectrum is still there, but not so strong that it will emit a visible greenish light.

Below is another example of the light energy coral use at different depths:

You can see with this graphic illustration that the ATLANTIK V4 will give coral found at all depths the light they require for very good growth and color.

Since most coral we keep are found between 10 to 30 meters in depth, we have toned down any high peaks of red and used only what was necessary to enhance the adsorption curve of the light.

Most aquarium LED lights that incorporate many red LEDs tend to foster problems with cyano and Bryopsis, which are two nemesis’ that are difficult to exterminate without endangering the coral population of a tank.

So RED and Infra RED is one of the new improvements?

If you think about red light, you must also recognize that our coral come from different habitats and different depths. Offshore and with clear water the penetration of red light is deeper than shallow waters at the coast where you have a lot of sediment, which prevents the red light from penetrating to a lower depth than shown in the offshore graphs (3m, 15m, 20m).

This was one of the considerations we had in mind as we developed the new ATLANTIK V4 spectrum to ensure it produced enough red to satisfy coral of all habitats.

The new ATLANTIK V4 LED Panel contains 16 new types of custom made dual core LEDs in the nanometer range from 380nm to 850nm.  We at Orphek feel that this is the most complete and beneficial spectrum ever created for a coral reef aquarium. 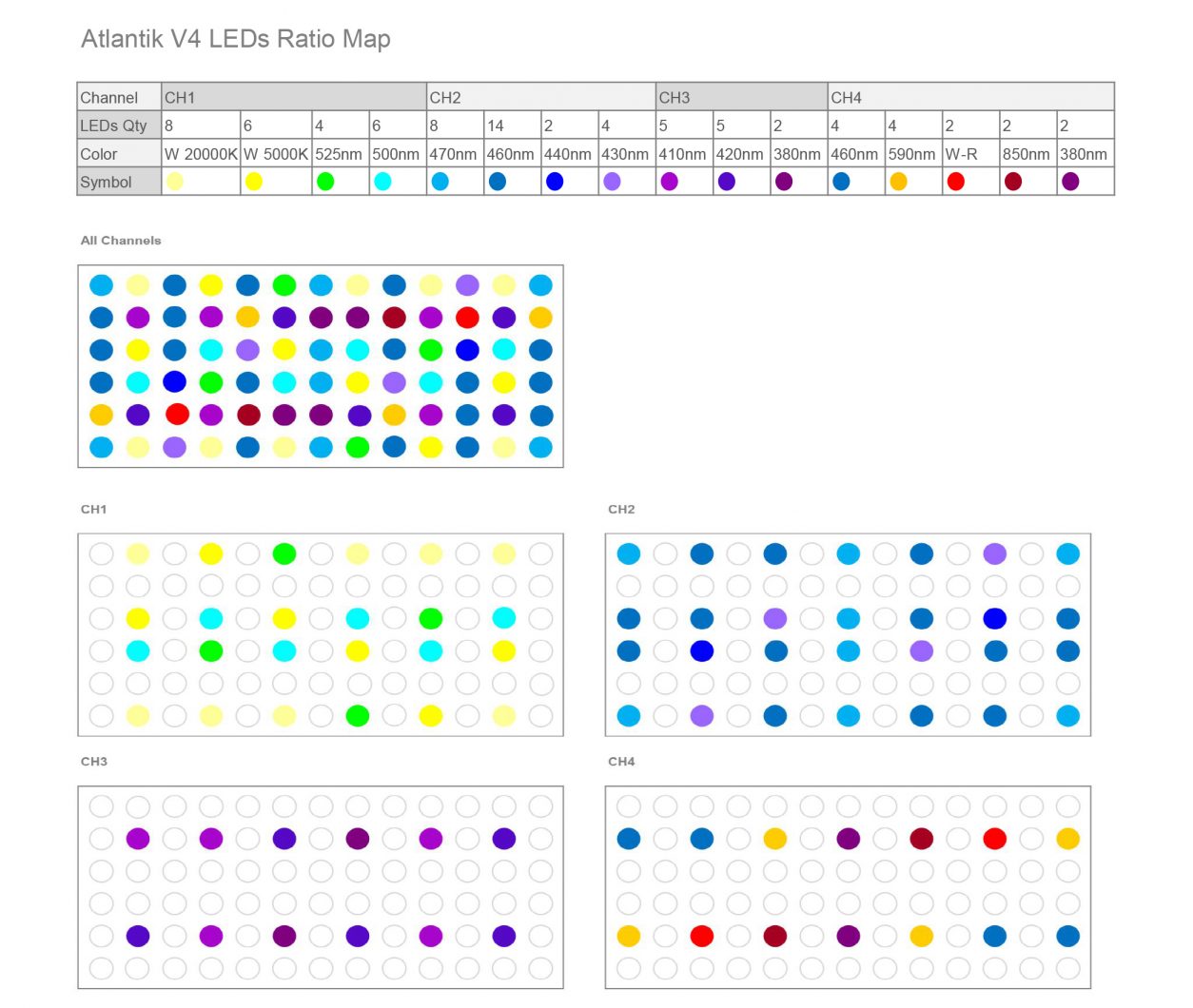 Why the New ATLANTIK V4 is the best product Orphek has produced today?

What else Orphek is offering you that others are not?

You are welcomed to order by emailing us to contact@orphek.com or filling our form at https://orphek.com/contacts/

Orphek would like this opportunity to publicly thank Dr. Schubert, Ronny Schöpke, and Immo Gerber, who all have extensively to the development of our successful ATLANTIK V4 spectrum.

The pictures below were taken at the University of Giessen, where our ATLANTIK V4 spectrum was tested in an experiment conducted by Dr. Patrick Schubert.

Dr. Patrick Schubert also informed that all cyanobacteria has disappeared from the tank. 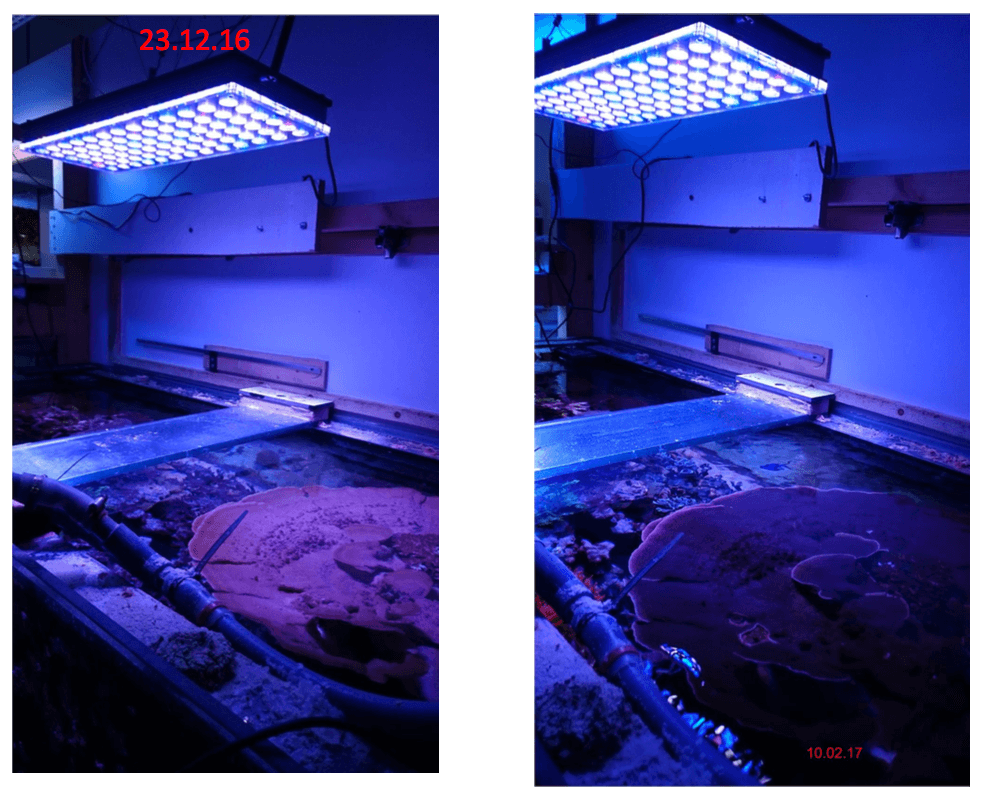 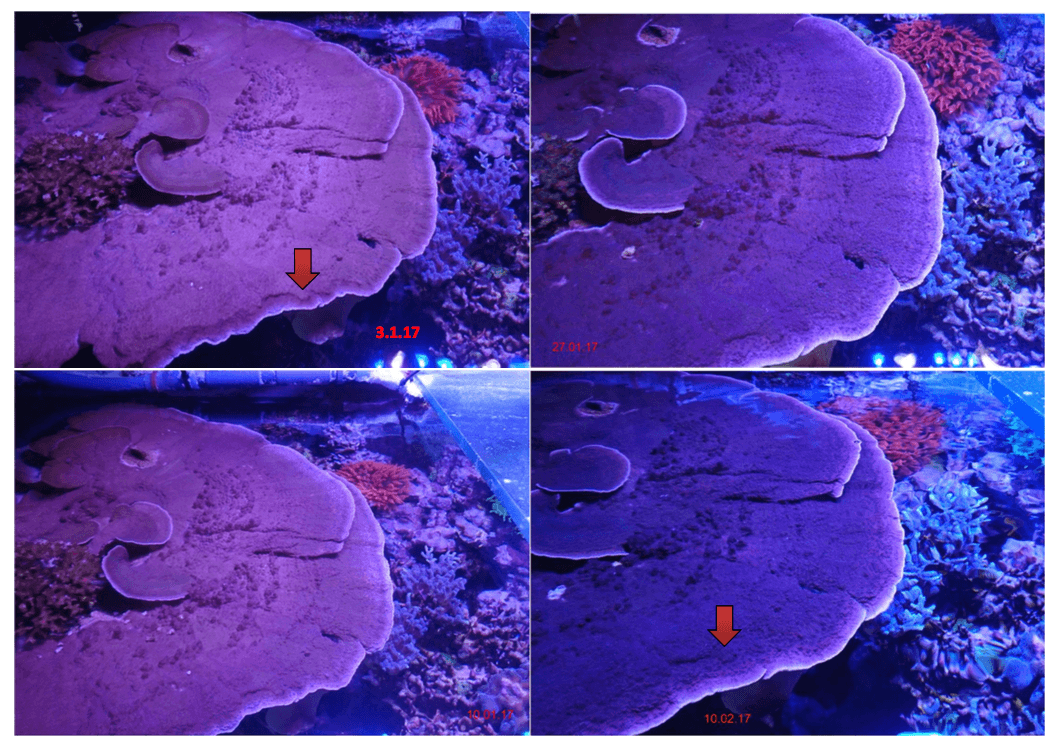